The Social Services and Health Care Division of the City of Helsinki has cooperated with Humap on the development of communal well-being at work for years. Humap is the partner of Helsinki’s social and health sector in working ability management. Other important development themes have been coaching leadership and self-direction. Supervisory work systematically supports communal well-being so that teams and employees can independently carry out their work and experience significance. 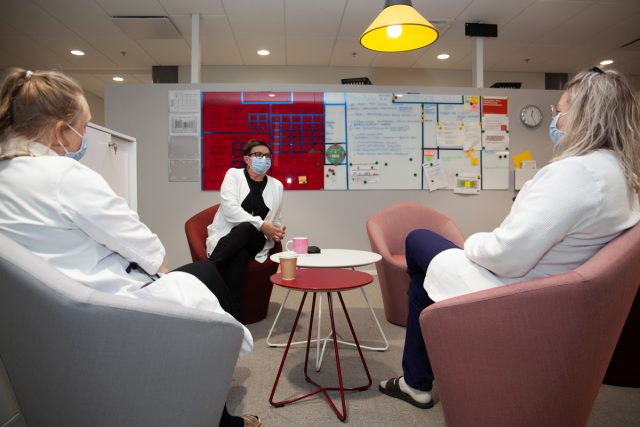 WELL-BEING AT WORK IS EVERYBODY’S BUSINESS

Over the years, Helsinki’s Social Services and Health Care Division (social and health sector) has worked extensively to achieve the goals of their well-being strategy and well-being at work. Employees are cared for and support is offered widely, from the Early Support model to resolving challenging situations. In 2017, Helsinki’s social and health sector was able to achieve a significant decrease in staff sick leave. This was partly due to investments in well-being at work.

“We have considered a lot about what well-being at work is and how we communicate this to our employees on a regular basis. I think it is quite simple. It is a question of having a smooth everyday life and good leadership. The interaction between the team and within the work community is effortless. People hear and listen to each other. Well-being at work is challenging, because it is such a broad concept. I think we all play a part in this. It is something in which we all play a part”, says Anne Heikkilä, who is a well-being specialist in Helsinki’s Social Services and Health Care Division.

FOCUSING ON COMMUNAL WELL-BEING AT WORK

In the future, the City of Helsinki and its social and health sector will focus on personnel. As a result of collaborating with Humap, the idea of developing communal well-being at work has come up.

“With the help of Humap, we have been able to focus on the right issues, and our long partnership is key to shaping our future. Change is constantly present in our operation, and resilience is needed to develop an organisation of this size and to change its operating methods”, points out Heikkilä.

“Cooperation with Humap has been easy and smooth. It has been diverse and has included building models for the future, developing new solutions, and providing assistance to those supervisors and teams who need it in their everyday work. We have found phenomena and results in building communal well-being at work in the long term. We have also built objectives together to monitor the impact of development. Regular meetings and sparring with each other are particularly productive in our cooperation”, says Heikkilä.

Sari Kuoppamäki, Helsinki Social Services and Health Care Division HR and development manager, is satisfied with the cooperation with Humap. “Our cooperation with Humap has been effective. We have succeeded in improving the well-being of work communities in highly challenging situations. Humap’s approach has been novel, fresh, and professional. The use of their electronic platform has made it possible to make matters visible. The cooperation has been constructive and very smooth.”

Humap’s Olli Viljanen says that extensive cooperation with Helsinki’s social and health sector has been excellent, and he is particularly impressed by the results of cooperative development.

“Our cooperation with Helsinki’s social and health sector has been an example of partnership at its best. We have learned from each other along the way. The good results have largely been achieved due to the nature of this cooperation. Positive changes in the work and communities of people maintaining critical functions have made this one of the most significant tasks during my career”, says Olli Viljanen, who is Humap’s development consultant for communal well-being at work.

The City of Helsinki is the capital of Finland. It is the largest employer in Finland, and it employs approximately 38,000 professionals and experts in four sectors and central administration